This privatization plan, the continuation of the corporate austerity campaign, has many aspects that attack the living standard and the democratic rights of the people of Ontario: END_OF_DOCUMENT_TOKEN_TO_BE_REPLACED

Communist Candidates Fight for Policies to Put People’s Needs Before Corporate Greed This provincial election is an important one for working people. Federal and provincial austerity policies are driving Ontario into another deep economic crisis. There is a huge gap between the rich and the rest. Poverty is on the Read more…

The 2014 Budget: “People’s Needs, Not Corporate Greed! Another Ontario is Possible!”

The 2014 provincial budget was clearly an election budget aimed to position the Liberals to the left of the NDP on a range of social policy issues. These include the proposed defined benefit pension plan, increases to the child benefit program and the extension of free dental services to impoverished children, cost of living increases to the minimum wage, a small increase to single recipients of Ontario Works, and small wage increases to Personal Support Workers.

The 10-year, $29 billion investment in infrastructure renewal and jobs, a portion of which were to be earmarked for youth employment, would have provided significant economic stimulus and jobs, and improved urban and inter-urban public transportation. $11.4 billion was set aside for hospital construction, and another $11.1 billion for School Boards to repair aging schools and build new ones.

The budget also proposed a miniscule corporate tax increase, eliminating the tax break of 7% on the first $500,000 of income (currently taxed at the small business tax rate of 4.5%). It also projected a small tax increase for the 2% of the population with incomes over $150,000.

But the budget was clearly a Big Business budget, with privatization at the core of the funding proposals, the transformation of many public services into private public partnerships (AFR’s), and the promise of future deep cuts to the corporate tax rate, from the current 11.5% down to 10%. Public sector layoffs and wage cuts are built-in, implicit in a package that contains continued restraints to operating budgets in hospitals and healthcare, public and post-secondary education, and social programs. This is the Drummond Report, implemented over 10 years. END_OF_DOCUMENT_TOKEN_TO_BE_REPLACED 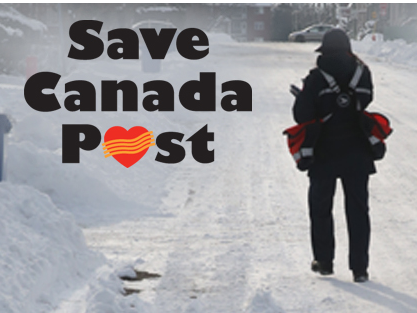 The federal government’s unilateral decision to eliminate home delivery, jack postal rates, and cut thousands of jobs at Canada Post is a massive attack on one of Canada’s ‘flagship’ public services. This ‘reform’ has nothing to do with “modernizing” our postal services; rather, it is a central part of the overall agenda of the Conservatives and their big business patrons to privatize public services and to attack the rights and interests of organized workers. The Communist Party of Canada joins with postal workers, the rest of the labour movement and many community allies in condemning this action, and calls for the widest mobilization possible to force the Harper government to cancel its implementation. END_OF_DOCUMENT_TOKEN_TO_BE_REPLACED