Any “back-to-work” legislation is a violation of labour’s right to strike and bargain freely. However, this particular law is even more egregious than previous legislation in several ways. This legislation is pre-emptive as there are still several days left before the announced strike. This legislation does not order arbitration as is common in other strikebreaking laws but unilaterally imposes the government’s contract, which means massive real wage cuts for education workers. Finally, this legislation uses the “notwithstanding clause” embedded in the Constitution as a loophole to try and circumvent labour rights. This is the first time in Canadian history that the notwithstanding clause has been used to attack labour rights. If it is allowed to stand, governments across Canada will be able to override workers’ rights on a whim, effectively turning back the clock on labour rights by 70 years.

While the Ford government has painted itself as “working for workers” and has said that this legislation is principally aimed at supporting students and families, the government’s real class allegiances are on display. There were no fines for private long-term care homes whose profits led to disproportionate suffering and death among residents. There are no fines being threatened for the price gouging and profiteering of grocery corporations. And there are no fines for landlords while rents continue to skyrocket. The government is only bold when it comes to pushing living standards down for education workers, more than 2/3rds of whom are women.

Ontario’s Financial Accountability Office (FAO) is now saying that real wages in the public sector are set to decline 11.3 percent over a three year period from 2021-2022 to 2023-24. Although public sector wages have already fallen over the past decade, this attack on wages is exponentially worse and is already sparking new militancy amongst public sector workers.

CUPE education workers are paid an average of $39,000 per year. The government intends to eliminate workers’ right to strike and impose a pathetic increase of 1.5% in average take home pay of 17 cents per hour for a worker making $43,000 a year. The 2.5% increase being imposed on education workers making less than $43,000 is still a full 4.2% below inflation, meaning it is a wage cut of 4.2% after a decade of inflationary wage cuts.

The government is lying when they say that above inflationary wage increases are not possible. Even without raising taxes on corporations and the super rich, the revenue is there now. Two weeks ago Education Minister Stephen Lecce announced one-time payments to all parents of $200 to $250 in a cynical bid to curry favour with parents and pit them against education workers. This money alone, $365 million, is enough to pay for the first year of wage increases that education workers are asking for. Last year’s budget turned out to be a surplus of $2.1 billion, mainly due to the fact that $1.4 billion less was spent on education than was planned. This is not about the Province being broke. It’s about the Ford government wanting to push down wages, break the unions and privatize public education.

The target of this legislation is not only the 55,000 admin staff, librarians, ECEs, custodians and others who make up CUPE’s members in the education sector, but also the hundreds of thousands of teachers and other education workers who are also currently in bargaining. Beyond that, this legislation will have serious implications for the 1.2 million broader public sector workers, not least of all in the healthcare sector, whose wages need to be increased in order to ameliorate the current manufactured crisis in healthcare. This is the first major post Bill 124 collective agreement and it will have a significant impact on all public sector wage negotiations that follow. The decade long decline in real public sector wages is also aimed at decreasing the bargaining power of private sector workers. Solidarity with CUPE, coordination and solidarity between all education unions and the broader labour movement will be key to winning the fight.

Education workers’ working conditions are students’ learning conditions. The support of parents and the community will be the decisive factor in defeating Ford’s anti-democratic back-to-work legislation. All workers are in a historic struggle to stop the largest loss of real working class wages in several decades and education workers are on the front lines right now facing an unprecedented attack. Now is the time to stand and fight! 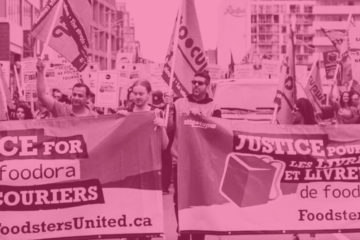